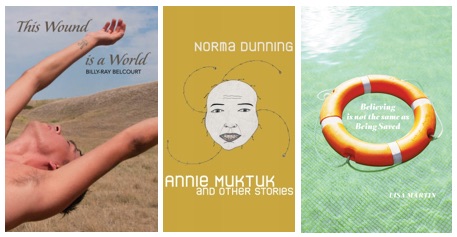 Part manifesto, part memoir, This Wound is a World is an invitation to “cut a hole in the sky to world inside.” Billy-Ray Belcourt issues a call to turn to love and sex to understand how Indigenous peoples shoulder sadness and pain like theirs without giving up on the future. His poems upset genre and play with form, scavenging for a decolonial kind of heaven where “everyone is at least a little gay.” (Source: Frontenac House)

When Sedna feels the urge, she reaches out from the Land of the Dead to where Kakoot waits in hospital to depart from the Land of the Living. What ensues is a struggle for life and death and identity. In “Kakoot” and throughout this audacious collection of short stories, Norma Dunning makes the interplay between contemporary realities and experiences and Inuit cosmology seem deceptively easy. The stories are raucous and funny and resonate with raw honesty. Each eye-opening narrative twist in Annie Muktuk and Other Stories challenges readers’ perceptions of who Inuit people are. (Source: University of Alberta Press)

Lisa Martin’s new poetry collection seeks the kind of lyric truth that lives in paradox, in the dwelling together of seeming opposites such as life and death, love and loss, faith and doubt, joy and sorrow. Here readers will find a range of moods, tones, and subjects, as well as both traditional and contemporary forms—from sonnets to prose poems. This is a collection imbued with the light of an enduring, if troubled, faith. With its focus on spirit, ethics, and how to live well, Believing is not the same as Being Saved offers a tender meditation on the moments that make a life. (Source: University of Alberta Press)

The Robert Kroetsch City of Edmonton Book Prize was established by the City Council in 1995 and is administered by the Writers’ Guild of Alberta. The prize was renamed in 2011 after the late Robert Kroetsch, who was best known for his Governor General’s Award-winning novel, The Studhorse Man. Entries are judged by an independent jury recruited by the Writers’ Guild of Alberta. The winning author will receive a $10,000 cash prize. The award is sponsored by Audreys Books and the Edmonton Arts Council.

The winner of the 2018 Robert Kroetsch City of Book Prize will be recognized at an awards presentation in June of this year.

Please join us on Sunday, May 6th, 2 pm at Audreys Books for readings by this year’s shortlisted authors!